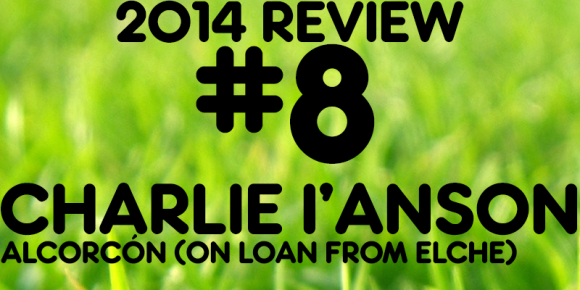 2014 has seen Charlie I’Anson make significant progress as he continues to build his career in Spain.

Just two years after appearing for Grimsby Town, Charlie (as he is known in Spain) made his La Liga debut for Elche in 2013.

Now a year on, the 21-year-old defender is a regular in Spain’s second tier as he hopes to impress enough to secure a spot back in his parent club’s starting line-up.

This is not the Englishman’s first spell abroad. When he was only seven years old, he and his family emigrated to Malaga.

This meant his footballing upbringing was on the continent. He was taught to play out from the back, something that may have been quite different had has his family not made the move.

In 2009, he returned to England to sign for Conference side Grimsby Town, turning down a move to Nottingham Forest in the process.

After 17 appearances for the first team, he made the move back to Spain to try and find a club in his adopted homeland.

His break came when he trialled at Elche, then a second division side.

He suitably impressed in order to secure a deal, where he would go on to captain Elche’s second side in the fourth and third tiers.

The start of last year saw I’Anson continue to impress for his side’s second team and another La Liga start soon beckoned in March last year.

After finishing the season off back in the second team, guiding his side to 7th place in the Segunda B division, the 21-year-old joined Alcorcón on loan – with the hope that he would receive first team football in Spain’s second tier

His development towards the latter end of 2014 was hampered by injury, missing five games in a row in December.

However, before the misfortune, he had made nine appearances, eight of which were starts. His solid defensive displays mean Alcorcón currently sit in 9th in the Segunda Division, just two points off the play-offs.

If Charlie manages to re-sustain his form back in Alcorcón’s line-up for the remainder of the season, then 2015 offers the Englishman the very real prospect of becoming a regular amongst some of the world’s greatest players. A return to Elche would see him go toe-to-toe with the likes of Lionel Messi and Cristiano Ronaldo every week.

2014 has been a very successful year for Charlie. Although it would not have ended as he would have liked, the 21-year-old has made another La Liga start, captained Elche’s second team and played regular football in the Segunda Division. For a defender playing Conference football only three-and-a-half years ago,that, almost certainly, can be regarded as a success.