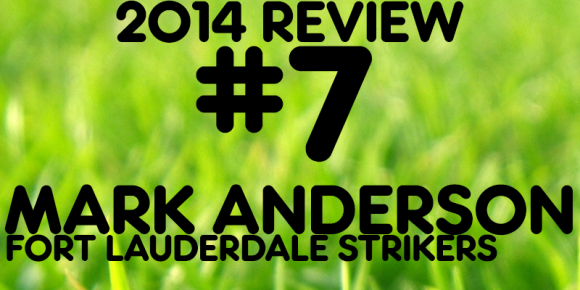 Last year was the Durham-born midfielder’s third season as a professional at the Strikers, having joined the second-tier club in 2012.

After moving to the States in 2008 to study at Barry University, Florida, Anderson played college football and also had a stint at fourth-tier side Balton Rouge Capitals in 2010 – before graduating in 2011.

Following graduation, he impressed in the NASL combine and was selected by the Fort Lauderdale Strikers to join their roster for the 2012 season.

Two years on, and Anderson has had his most impressive season to date.

He made 27 appearances, 26 of which were starts, missing just two matches all season.

His performances, which saw him contribute six goals from midfield, helped the Strikers to equal their best ever finish in the NASL. He was also named in the the league’s ‘Team of the Week’ on three occasions.

After reaching the post-season playoffs, the Strikers saw off Minnesota United in the semi-finals on penalties, with Anderson converting his effort from the spot.

The Englishman’s side then took on San Antonio Scorpions in the final, which is known as the Soccer Bowl. Despite assisting his side’s goal, Anderson was unable to prevent defeat, as the Strikers fell to a narrow 2-1 reverse. Although his side lost, the 25-year-old could be pleased with his performances and the NASL runners-up medal.

After three seasons with the Strikers, Anderson is amongst the club’s record holders. The club have only been known as the Fort Lauderdale Strikers since 2011, having previously been known as Miami FC before relocating.

With the side only four seasons old, Anderson is currently the club’s all time goal scorer, with 19 goals, and has also made the third highest amount of appearances for the club.

During his time in the States, the English midfielder has picked up a reputation for scoring speculative goals. In 2012, he wowed spectators with a goal from his own half, before doing it a again a month later, when he scored from virtually the corner flag.

At 25, Anderson still has the best years of his career to come and after a season which so very nearly brought silverware, there’s nothing to say he cannot do it this year.

2014 was a good year for Anderson. He has contributed six goals, four assists and showed composure where it really matters, with his performances in the post-season playoffs. This year will see the attacking midfielder try and do it all again and, maybe, go one step further and lift the NASL title.