It may have been a record-breaking transfer window for Premier League clubs but it was also a significant one for English players moving overseas.

There were moves to Serie A, the Bundesliga and even a move to FC Barcelona for one hot prospect. Let’s take a look at a round-up of all the biggest moves in the winter window.

Ademola Lookman – Everton > RB Leipzig (loan)
This one came out of nowhere. Okay, RB Leipzig have previous for snapping up young British talent following their move to sign Scotland’s Oliver Burke from Nottingham Forest in the summer of 2016 but this was still unexpected.

Just two days after Everton boss Sam Allardyce had said he did not want Lookman to leave, the 20-year-old forced a move through to Bundesliga side RB Leipzig.

It is rumoured that Everton in fact wanted Lookman to earn some playing time with Championship side Derby County but the former Charlton man was insistent he be allowed to join Die Roten Bullen.

It’s certainly an interesting move. Lookman has not been getting enough minutes at Everton this season, despite scoring twice in the Europa League, so a loan move does seem logical. However, the move to Derby would more than certainly have seen Lookman earning more game time than a move to a Champions League side like Leipzig.

That’s not to say Leipzig won’t give youth a chance. They have earned a reputation for buying some of Germany’s best youth talent on their surge up the football pyramid backed by Red Bull cash and Burke made 25 league appearances for the side last year, albeit 20 as a substitute.

Let’s hope they give Lookman a chance to impress and develop his skills.

UPDATE: He only went and scored the winner on his debut, didn’t he?! 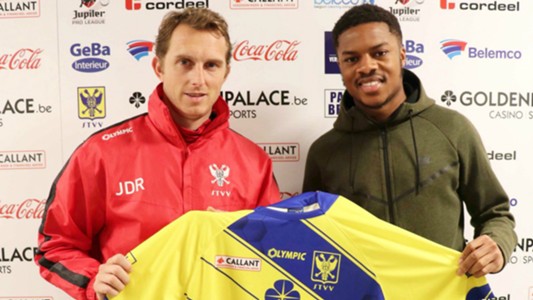 Chuba Akpom – Arsenal > Sint-Truidense (loan)
It’s fair to say Chuba Akpom’s career to date has been one full of promise but one that is yet to deliver. Eighty-one career appearances have yielded just seven goals, all of which for Hull City during a loan spell a few years back. So maybe Arsenal were right to opt for a move abroad to be the young forward’s sixth loan club.

They struck a deadline day deal with Belgian top division side Sint-Truidense which will see the former England under-21 international ply his trade overseas for the rest of the season.

The 22-year-old’s new club are currently enjoying relative success in the Belgian First Division A, sitting in sixth place after finishing in 12th last season. This could be a positive for Akpom as he will be joining a side full of confidence but he could also find it hard to make his way into the starting lineup. The forward will have to take his chance when it comes.

UPDATE: Akpom was a 75th minute substitute for his new side at the weekend but he was unable to prevent a 2-0 loss.

Reece Oxford – West Ham United > Borussia Mönchengladbach (loan)
In the end, Reece Oxford ended the window where he started it but that was not to say that January did not hold a lot of uncertainty for the 19-year-old.

After finally getting his chance in the Gladbach starting lineup, starting back to back games in December, Oxford was recalled from his season-long loan by West Ham manager David Moyes at the end of 2017. Fast forward a month and Oxford is heading back to Germany where he can hopefully pick up where he left off.

He had only made four appearances for Gladbach before being recalled but the back-to-back starts had given hope of an extended run in the side and his brief appearances had done enough to have RB Leipzig chasing after him.

In the end though, talk of a permanent deal disappeared and it looked like the talented youngster would be remaining at the London Stadium after he made three appearances in January due to the Irons being ravaged by an injury crisis. However, on deadline day, he returned on loan to Gladbach for the rest of the season and would once again join up with compatriot Mandela Egbo.

UPDATE: Oxford and Egbo were on the bench for Gladbach as Lookman scored the winner for RB Leipzig.

Rolando Aarons – Newcastle United > Hellas Verona (loan)
Rolando Aarons made his Premier League debut in 2014 but despite that, he has made just 22 league appearances in his career. Therefore, a loan move seemed likely for the Jamaican-born former England U20 international but the destination of the loan was a surprising one.

Serie A strugglers Hellas Verona were the side chosen for Aarons to kick-start his career. On one hand, it could be hard for the winger to establish himself in Serie A playing for a team who currently sit second bottom but at least this means he should pick up more minutes than he was with Newcastle, having made just three league starts before the loan move.

UPDATE: Aarons made his debut in a 1-0 loss against Roma at the weekend, starting and playing 71 minutes.

Marcus McGuane – Arsenal > FC Barcelona (undisclosed fee)
Wow. Juventus had been rumoured to be interested in Arsenal academy product Marcus McGuane last year but a move to Barcelona for the 19-year-old must have come as a surprise, even to him.

Initially the talented youngster will link up with the Spanish giant’s B team in the second division in Spain but what an opportunity for a player who had just two senior appearances to his name before the move, both of which came in this season’s Europa League.

Barcelona announced the deal on their official site, stating they had given McGuane a three year deal with the option of a further two years. His release cause was set at a cool €25m.

Arsenal will no doubt be disappointed to lose a player of McGuane’s potential but with six months left on his contract and no new deal, the writing was on the wall for the Gunners to lose another talented player in January, following the departures of Alexis Sanchez, Theo Walcott and Olivier Giroud.

UPDATE: McGuane made his debut at the weekend as a substitute, playing 16 minutes in a 2-1 win away to  Córdoba.

john Bostock – RC Lens > Bursaspor (undisclosed fee)
Most English football fans will probably remember John Bostock as being the man who Spurs paid £700k for after making his debut at just 15 for Crystal Palace.

That would be the wrong reason to remember him.

Bostock has carved out a very successful career playing abroad, especially during his time in Belgium where he was a star player for OH Leuven, helping them earn promotion to the Belgian top flight. Coincidentally, that club is now managed by former Leicester boss Nigel Pearson.

After leaving Leuven, the 26-year-old midfielder played for Lens for a season-and-a-half in France’s second tier before his January move to Turkey.

The transfer presents a massive opportunity for Bostock, having earned his chance in a league as prestigious as the Turkish Super League through his performances in Belgium and France.

Bit of a disclaimer here, Bostock was once called up to the Trinidad & Tobago national side but he is yet to be capped so I’m counting him still!

Manchester United midfielder Matty Willock has returned from a loan spell in Holland with FC Utrecht to join St Johnstone on loan. His brother Chris is still with Benfica B.

New York City’s star winger and England U21 international Jack Harrison secured a move to sister club Manchester City and was subsequently loaned out to Middlesbrough.

Jack Rodwell saw a trial with Vitesse fall through.

Isaac Buckley-Ricketts unsuccessful loan spell with Twente is over, he returned to Man City to then join Oxford United.

Liverpool’s Ryan Kent has returned from Bundesliga club Freiburg to move to Bristol City on loan.