Elliott Moore likes playing football overseas. Last summer the defender was celebrated winning the Toulon Tournament with a youthful England side. This year he is coming to the end of his first season of senior football with Belgian side OH Leuven. It’s fair to say the young Leicester defender has learnt a lot from playing abroad.

The 21-year-old has just one game remaining of his loan spell at the Belgian second division club managed by former Leicester City boss Nigel Pearson and he is looking back at all he has learned this year.

“I feel personally that I’ve had a good season over here,” he says. “Obviously there is room for improvement and I’ve still got a lot to learn and a lot to improve on but it’s been a great experience for me.

“I’ve played with players who have a lot of experience at top flight football here in Belgium so I’ve been able to learn a lot from them as well.”

Moore’s loan side for this season has been OH Leuven who are owned by the same King Power Group who also own Leicester. The club play in the second tier of Belgian football but because of the complex league structure in the country, Pearson’s side have ended their season playing against top flight sides in the Europa League play-offs, despite missing out on the promotion play-offs. It’s a system which the Leicester loanee still finds complex himself.

“Yes, it is very complicated over here! But playing against 1A sides (top flight) has been a great experience and a huge test for me personally and us as a team.

“The top division is where Leuven wants to get to and I think we are proving that we can handle ourselves against top teams. Personally, coming up against top individuals has been a huge test for me and will help me improve my game a lot.”

The 21-year-old defender made the bench once last season for Leicester in the Premier League and he made an appearance in the annual Barclays Asia Trophy curtain-raiser in Hong Kong but the ambitious England youth international wanted more. 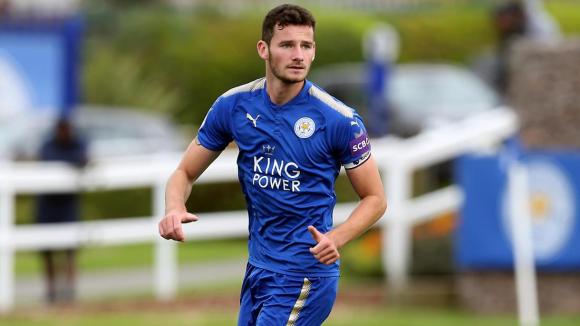 The move meant Moore would go from regular action for the Under-23s in the Premier League 2 and UEFA Youth League to playing in front of thousands of paying fans every week at the heart of Leuven’s defence.

Before he could get down to action though, he had to settle into what was to be his home for the next year, not that he had much time to do that.

“My girlfriend moved over with me so I’m never on my own or get bored,” he says. “We both miss our family and friends so that side is a bit difficult but whenever we get the chance we make sure we go home or get people to come out here and see us.

“We make sure we go to the big cities like Brussels, Antwerp and Brugge which are all worth a visit.

“I didn’t have much time to settle in because as soon as I came over I had training and then the next day we had a game so I was thrown in the deep end, which was quite good because I was straight into the action.”

Finding the best way to introduce himself to his new teammates was to perform on the pitch, Moore quickly established himself in a Leuven side who were looking for promotion and once had John Bostock on their books.

His performances at the back saw him become one of the first names on Pearson’s team sheet every week and one of his key skills, communication with the rest of his defence and goalkeeper, was not affected.

“The communication isn’t a problem really. Everyone speaks good English and understands me on the pitch so that’s the most important thing.

Speaking of the boss, Pearson is a manager known for his no-nonsense style and the young defender is full of praise for the impact his temporary boss has had on him this season.

“He’s one of the best coaches I’ve worked with and he’s helped me a lot personally. He was also a central defender so he helps us defenders out a lot and gives us a lot of advice.”

Having Pearson as his boss has also helped him adapt to Belgian football with Moore himself admitting he was impressed with standard but having racked up 34 starts and three goals in all competitions so far this season, it’s far to say he’s adapted well.

“Because this is my first loan I can’t really compare it to first team football in England but it’s a very good standard. I was very surprised when I came out here at just how good the standard was.

“Teams have a lot of very good individuals and it’s a massive test for me. I think in England it’s a bit more physical than out here but the technical side is very good.”

“Yes definitely I would recommend going abroad. You have to learn to grow up. Being away from family and friends is difficult but it’s a great learning curve on and off the pitch.

“You also get to experience a different way of football. The style of play, the speed and the physicality of the football abroad will all be different so you have to adapt your play which is a great experience.”

Moore is set to return home over the summer and he will no doubt put everything he has learnt in Belgium to good use as he aims to break into the Leicester first team.