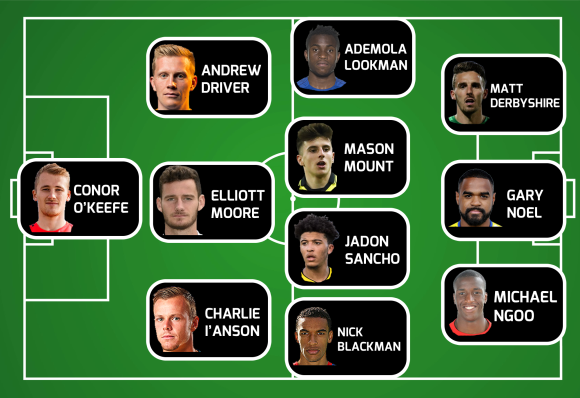 So there it is, my English abroad team of the season for 2017/18! Remember only players who played for teams that played a 17/18 season count so players who are playing in calendar year seasons (like MLS or many Scandinavian leagues) were not eligible.

GK: Conor O’Keefe (Móstoles Balompie)
The goalkeeper made every success of his move to Spain, learning the language and benefiting from professional coaching. He even made a trip to the Bernabéu with his first side Fuenlabrada for a Copa del Rey tie and then went on to play regular football for Móstoles Balompie further down the pyramid.

CB: Andrew Driver (De Graafschap)
A former midfielder now playing in the left back role, Driver helped his side De Graafschap earn promotion back to the Eredivisie. This year was his third season with the Dutch side and his solid performances at the back saw the Superboeren earn promotion back to the top tier after two seasons in the Eerste Divisie. A versatile player, the former Hearts man also played as a centre back and a left midfielder this year.

CB: Elliot Moore (OH Leuven, on loan from Leicester City)
Moore’s first season in senior football could not have seen him depended on anymore highly. The Leicester loanee missed just three matches all season as his OH Leuven side battled it out against top division sides in the Europa League playoffs. The centre back made 35 appearances scoring three times and even captained his side twice despite being just 21-years-old.

CB: Charlie I’Anson (Granada & Real Murcia)
After struggling to break into the Granada defence at the start of the season, I’Anson joined Real Murcia in January and didn’t look back. The 24-year-old missed just one game as Murcia finished the season strongly to earn a place in the promotion playoffs. Unfortunately, Murcia lost 4-2 over two legs to I’Anson’s former side Elche.

LM: Ademola Lookman (RB Leipzig, on loan from Everton)
Lookman went from bit-part player to World Cup dark horse in the space of his six month loan deal with German side RB Leipzig. The 20-year-old had managed just seven league appearances this season for Everton before making the surprise loan move to Leipzig and just like how he had done for the Merseyside club, the talented winger marked his debut with a goal. He finished the season with five goals and four assists in just 11 Bundesliga appearances for Die Roten Bullen.

CM: Mason Mount (Vitesse, on loan from Chelsea)
Voted as the Vitesse’s Player of the Year, Mount had an extraordinary debut season in senior football. At the age of 19, the Chelsea loanee was the vocal point of the Dutch side as he picked up 14 goals and 10 assists from midfield. It was a remarkable haul from a young man who had not played a single senior match before this season.

CM: Jadon Sancho (Borussia Dortmund)
Expected to be one for the future when Dortmund paid £8m to Manchester City for his services last summer, Sancho finished the season as an integral part of the German’s squad. Despite being only 18, ended the campaign with one goal and four assists in the Bundesliga. He also scored three times in the UEFA Youth League for the club’s under-19s.

RM: Nick Blackman (Maccabi Tel-Aviv, on loan from Derby County)
After struggling for game time with Derby County last season, Blackman’s unusual move to Israel proved to be the much-needed spark his career needed. In all competitions, the 28-year-old scored 12 goals including one against Villarreal in the Europa League as his Maccabi Tel-Aviv side won the Toto Cup (equivalent of the League Cup).

ST: Matt Derbyshire (Omonia Nicosia)
For the second season in a row, Derbyshire finished as top scorer in the Cypriot top flight, surpassing fifty goals after just two campaigns with Omonia Nicosia. This year it was 23 goals in 33 league appearances as the 32-year-old continues to go from strength to strength despite his advancing years. The former Nottingham Forest striker also scored a hat trick this season and his impressive record is despite the fact his side managed to finish only 6th in the 12 team division.

ST: Gary Noel (VFB Lübeck)
Noel finished the season on absolute fire with seven goals in his last nine games VFB Lübeck finished fourth in the Regionalliga Nord division in Germany. The Londoner who is now a Mauritius international, made it back to back seasons in which he’s scored 14 league goals albeit in five games less than he managed it in last season (26 to 31).

ST: Michael Ngoo (Tirana)
The former Liverpool man may have only played 19 league games for Albanian side Tirana this season but that didn’t stop him having the best season of his career, bludgeoning 11 goals. The 25-year-old’s side went on to be crowned champions, despite him playing his last game in March.

Substitute: Kris Thackray (Defender, Gżira United)
The 30-year-old from Newcastle played the second half of the season as his side earned a spot in the Europa League qualifiers for next season.

Substitute: Fankaty Dabo (Defender, Vitesse, on loan from Chelsea)
The Chelsea loanee was a regular as he ably supported his teammate Mason Mount from defence.

Substitute: Mandela Egbo (Defender, Borussia Mönchengladbach)
The young defender finally made his debut for the Gladbach first team as well as being a regular for the second team who play in the fourth tier where he scored twice in 23 games.

Substitute: Todd Cantwell (Midfielder, Fortuna Sittard, on loan from Norwich City)
Played just ten times after joining the Dutch side in January but became an instant fans’ favourite as Fortuna earned promotion the Eredivisie. The 20-year-old scored twice and picked up three assists.

Substitute: Wayne Brown (Midfielder, Newcastle Jets)
Brown’s second season with the Newcastle Jets couldn’t have been anymore different from his first as the basement club become title challengers this season. The former Fulham youngster made 20 appearances as the Jets lost in the A-League Grand Final to Melbourne Victory.

Substitute: Matthias Fanimo (Midfielder, Drava Ptuj)
The pacey winger become prolific following his move to Slovenia, scoring eight goals in 13 games including a first career hat trick. The former England youth international’s goals saw his side make the promotion playoffs, which are yet to be completed.

Substitute: Chuba Akpom (Striker, Sint-Truiden, on loan from Arsenal)
As Arsenal continue to strengthen up front, Akpom finds his chances at the Emirates even more limited but he did his chances no harm with a successful loan spell in Belgium. He scored six goals in 13 starts in the most prolific spell of his senior career.