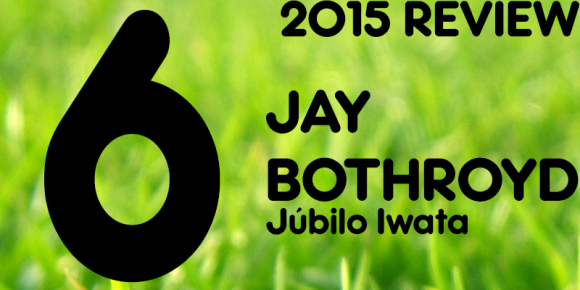 Finishing as the J2 League’s top scorer probably wasn’t something Jay Bothroyd imagined he would ever achieve when he started his career as a youngster at Arsenal but it was exactly what the former England international accomplished last year.

Bothroyd was no stranger to playing his football abroad when he signed for Japanese second division side Júbilo Iwata in February last year.

The striker had previously featured for Perugia in Italy’s Serie A during his early career and spent 2014 with Robbie Fowler’s former side, Muangthong United in Thailand.

However, despite being an England international and with five seasons of Premier League experience under his belt, Bothroyd was initially over-shadowed by Uruguayan legend Diego Forlán as the most well-known goal-getter in Japan’s second tier.

Despite this, the 33-year-old showed Japan football fans why he should not be overlooked. On his debut for the Júbilo, the former Cardiff City striker fired two goals in a 3-1 win over Giravanz Kitakyushu, setting the tone for the rest of the 2015 season.

Bothroyd’s game only improved from there on. His side Júbilo finished fourth in 2014 and were pushing for promotion in 2015. The England striker made that dream a reality with his prolific goalscoring throughout the year, and alongside 25-year-old Brazilian striker Adailton, who himself fired 17 goals, Júbilo finished second and secured promotion back to Japan’s top tier.

Eleven out of the forward’s twenty league goals were the first goal of the game, thus, often setting up his side with he perfect platform for victory.

However Bothroyd’s best performance of the year arguably came in a game which did not result in three points. The 3-3 draw with Kyoto Sanga in August last year did not wield the result that Júbilo fans wanted but they did get to see their new hero fire a hat-trick. Bothroyd gave his side the lead on three occasions but still could not guide his side to the win.

Last year was actually Bothroyd’s joint-best season in terms of goals scored. In 2010/11, also the season where his single England cap came, he fired 20 goals for Cardiff City in all competitions, hitting 18 of those in the Championship. However, his 20 goals for Júbilo came in ten games fewer than he managed it for the Welsh club.

2015 was Bothroyd proving himself to the fanatic fans of Japan’s second division. Finishing as top scorer, forming a lethal strike partnership and earning promotion was more than the forward could have asked for.

2016 will be a big step-up. Of course, Bothroyd has played at the highest level of football but at the age of 33 and with a newly promoted club, this year could be his hardest challenge to date. Júbilo fans will be hoping the striker can continue his prolific scoring despite their promotion.